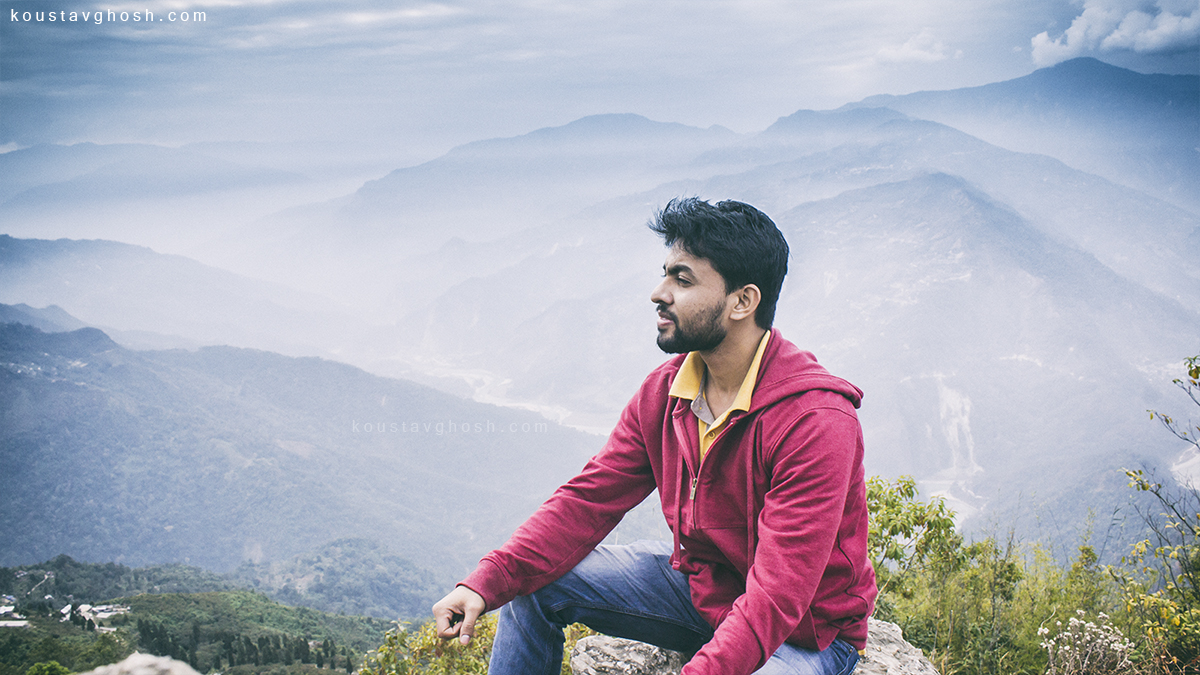 Next morning I woke up early to witness the sunrise. To my disappointment it was still dark outside at 5 AM in the morning. It was a long night yesterday and I had enough sleep. I got up and readied myself. I looked outside and the eastern sky started to brighten up a little. I took my camera and went out. I thought of hiking uphill to get a better view of the entire valley. It was cold outside and I was going uphill following the narrow path. I was panting severely while climbing up. After climbing up for around 10 minutes I found a small house. I saw an old lady sitting near an edge with a little kid. There was another kid playing around with his bi-cycle. I initiated a conversation with him and he told me that he loves playing with his bike. His four dogs came to me. Two of them put their front two legs on my chest leaving my black jacket muddy and dirty all over. There I met Dum Cheng (as far I could remember his name correctly), the father of the kid. He was such a nice person. He offered me butter-tea. He told me a lot of stories about himself. He works in the Ichhegaon only as a carpenter. He showed me where Sikkim, Darjeeling is in the valley far away. He also showed me Cinchona trees. In case if you are wondering why this tree is so special, the bark of these trees are used in making medicine for Malaria.  It was a nice experience meeting him. 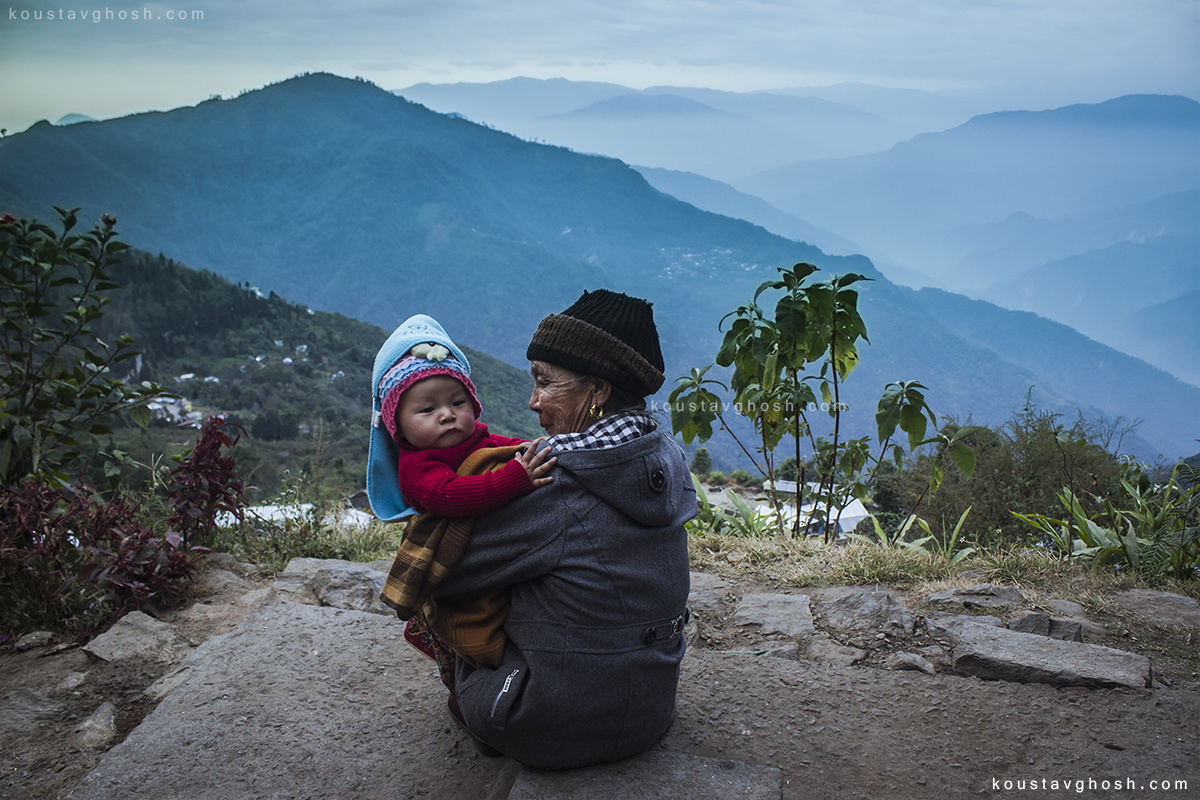 The old lady sitting with a little kid 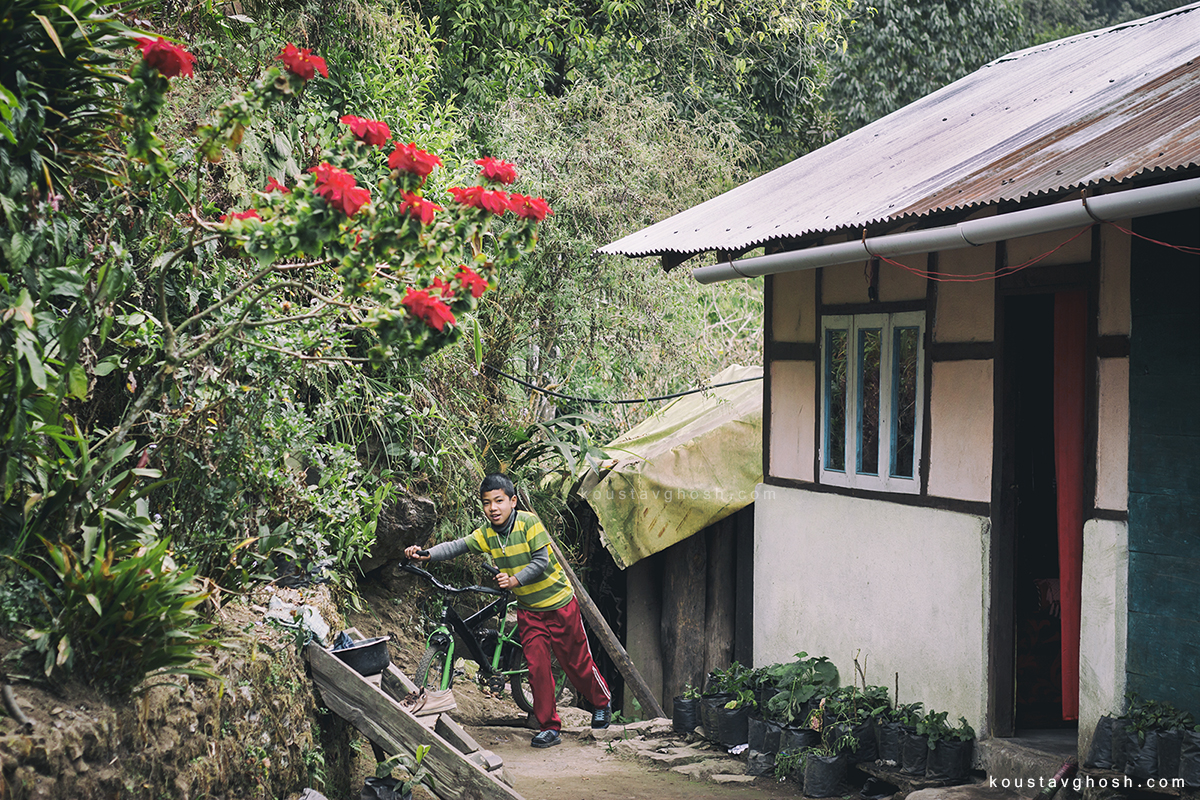 He loves to ride his bi-cycle 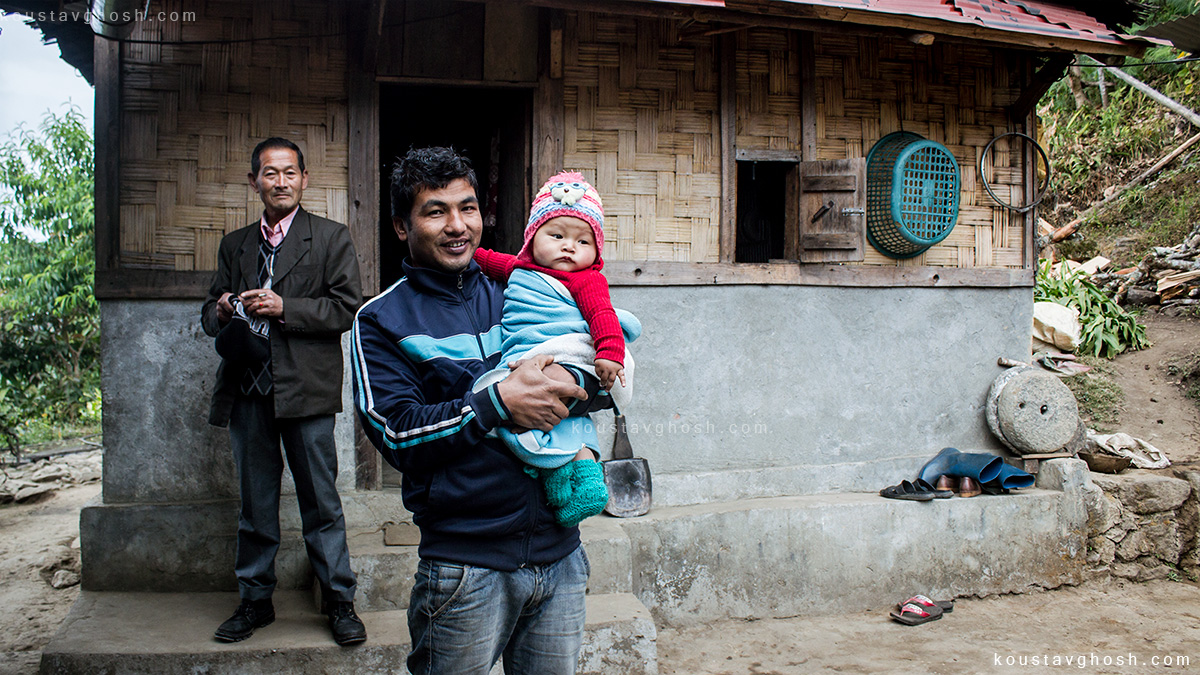 Dum Cheng with his little child and father.

It was 8 AM in the morning and I realized I was yet to have my breakfast. I decided to get down to my home stay. They served me hot luchi and Squash curry along with an omelet. I wanted to go to Sillerygaon by trekking. Ayan, the nephew of the owner agreed to accompany me. He called up one of his friends and his dog Jack. All of us started to trek through the dense hill forest. The path was sometimes very steep and rocky. You have to be careful while walking. It was uphill and the path is also narrow. We all three were panting as we continue to go ahead. It took us nearly 40 minutes to reach Sillerygaon. Sillerygaon is more commercialised than Ichhegaon. Unfortunately no Jio network there as well to my disappointment. 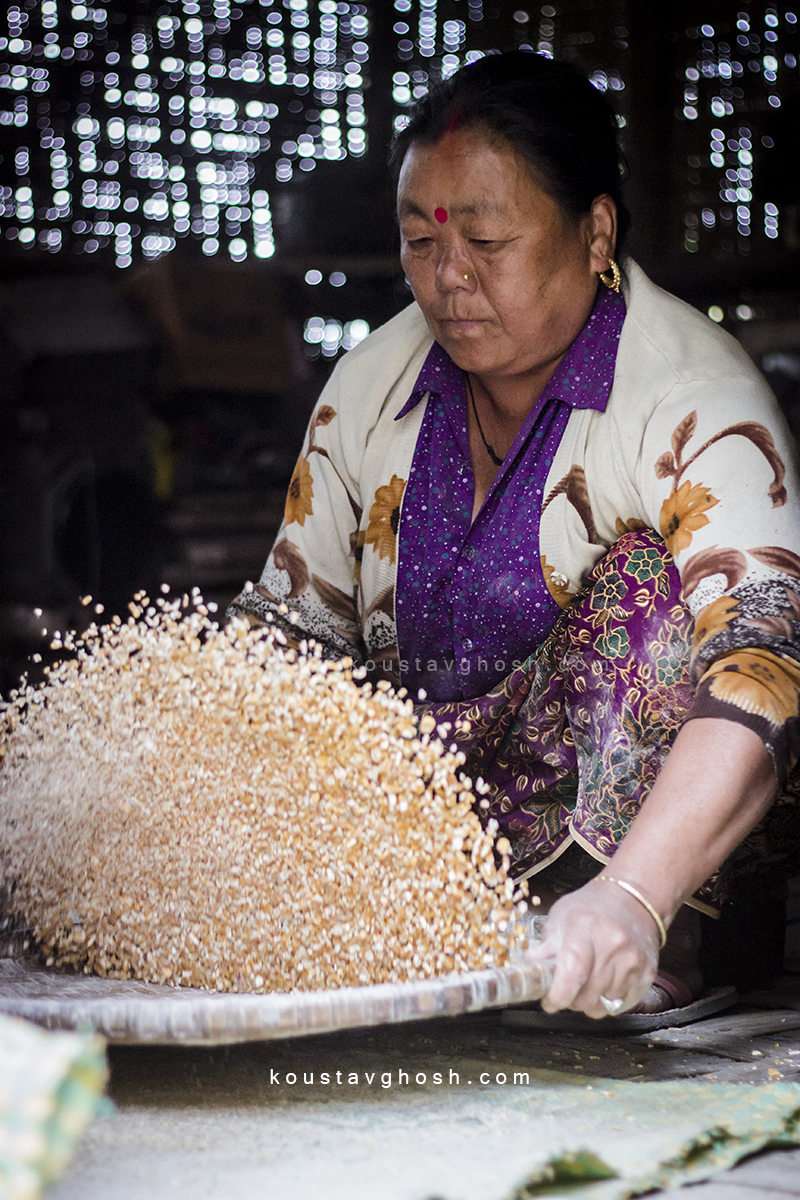 Khawas family was very much generous

After spending some time we went to Ramitey View point. On my way to Ramitey View Point I met Daniel. Daniel came from USA couple of months ago to India. He was doing mountain biking here. At first he wished me in pure Nepali language which I could not understand at all. I told him that in India there are more than hundred official languages people speak and I don’t speak Nepali. He wished to connect me in Instagram and took my Instagram ID (@koustavghosh10). Then I went to Ramitey view point with Ayan and his friend. Jack didn’t come here. It was an amazing experience to see the Teesta bending between the mountains and flowing through the valley. I took few photographs to make a panorama photograph by stitching them later. I spent almost 40 minutes there. The place was very peaceful and the view was breathtaking. I was amused to find Jio network to be working here. It was almost noon. Ayan was hungry and so was I. We went back the same way through the forest. Ramitey view point will surely be one of the highlights from my entire trip.

Ayan and his friend on our way to Sillerygaon

After having my lunch I went to the Pine forest. I didn’t ask Ayan this time as he was already tired and I went alone. The temperature had started to fall by then. The sun was about to set. Few birds were returning to their nest. As I was walking up following the forest trail I could listen to the sound of the jungle. The loneliness was surrounded by long trees and unknown flora. I went ahead deep in the jungle. I was little bit hesitant to go further as I was alone. Suddenly two dogs appeared and started walking with me. I was no more alone and went further. I walked around for fifteen minutes more. It was becoming dark so I decided to go back. It was a different experience to walk alone in the jungle, listening to the chirping of birds and the silence of the jungle. 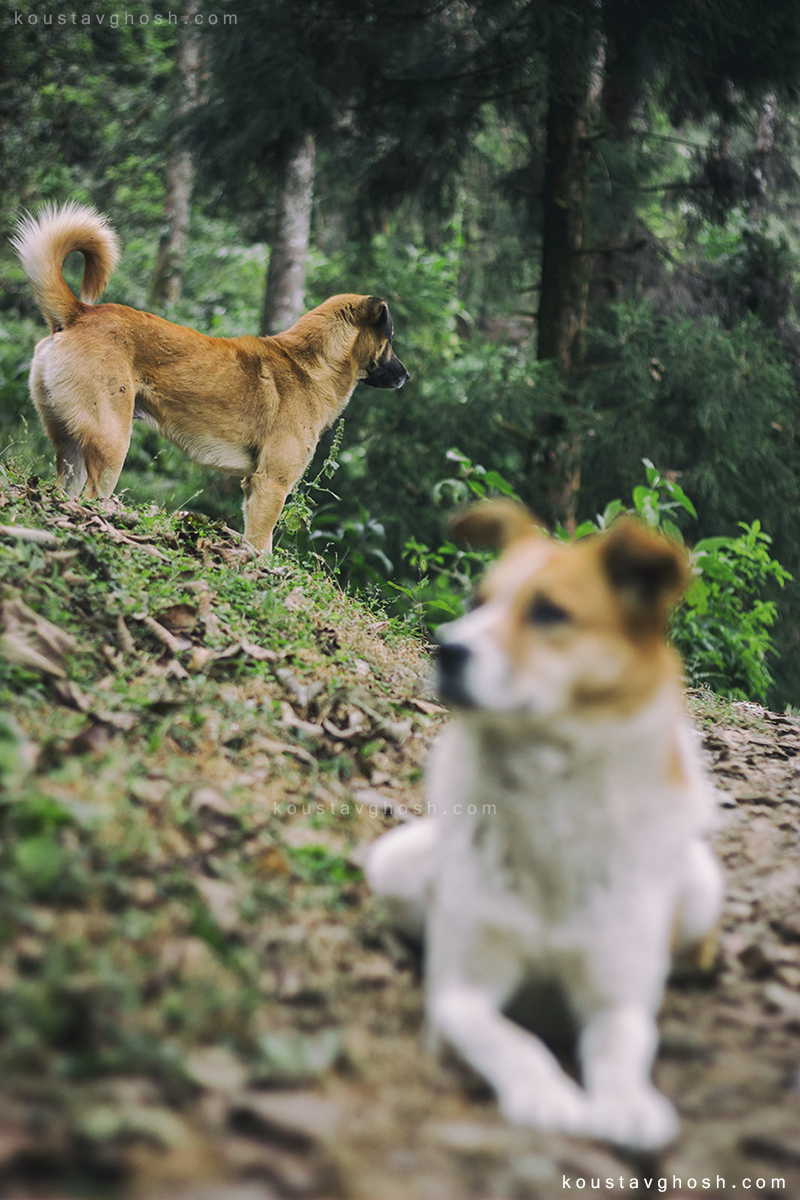 Two dogs appeared suddenly to accompany me when I was feeling lonely in the Pine forest.

My stay at Ichhegaon was about to end. I spent two beautiful days here and met some beautiful people. I was happy. This little time I spent here certainly added value to my life. I wish to visit here again and to explore this place more. I wish to be lost in the woods, to walk by the trail close to nature, back to nature. 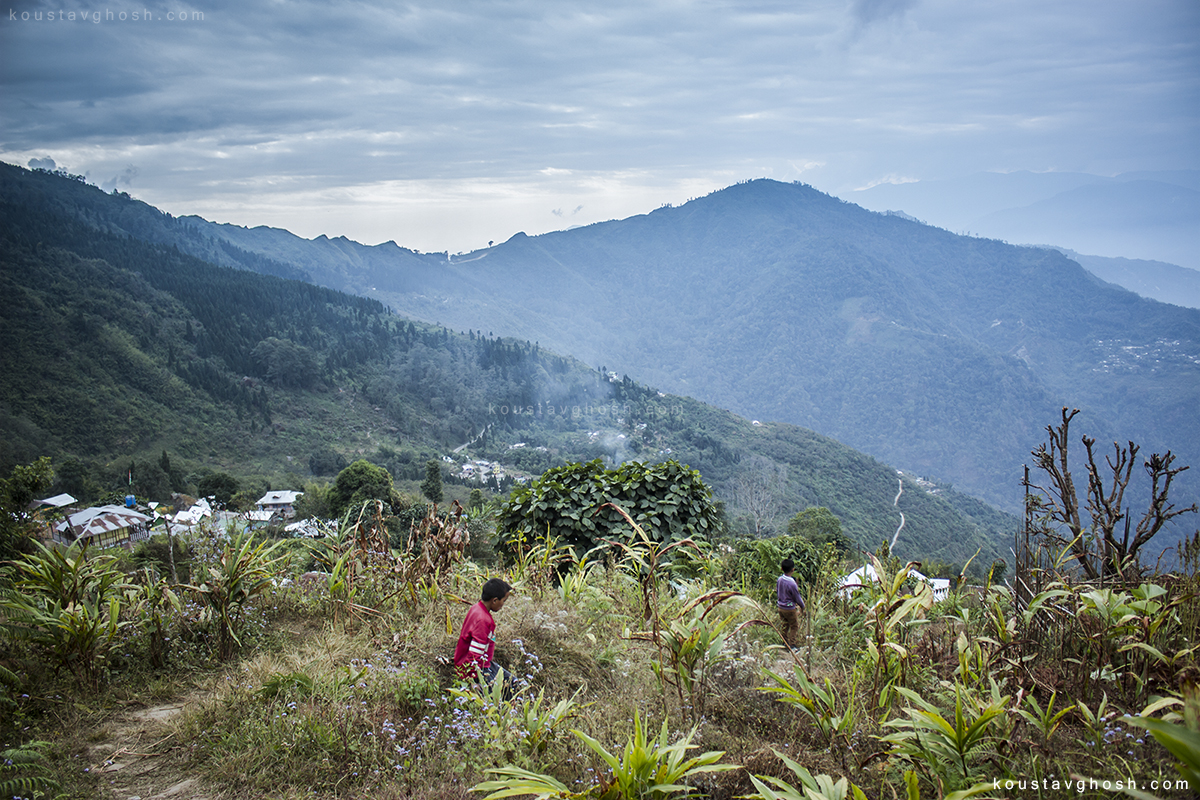 I want to come back again to this place