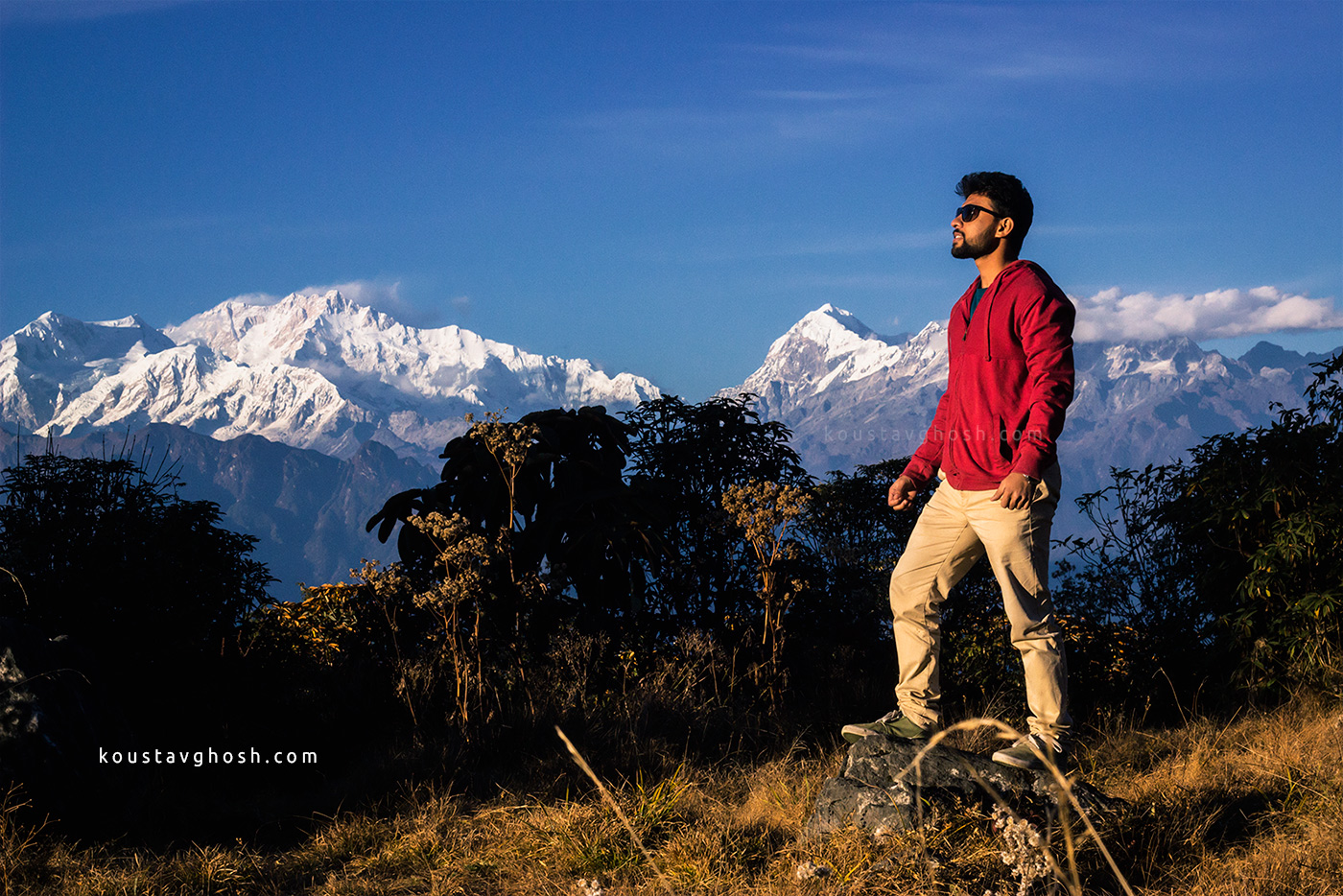 “Are you carrying extra batteries for your camera?” Bandhu asked me while he was driving the car and I was busy clicking the beautiful landscapes outside the window. He always had a bright smile on his face. I nodded and asked “Why?”. He replied that Hilley will be the last place where I will be getting electricity. There is no electric supply at Barsey which is situated in the Rhododendron Sanctuary at an altitude of around ten thousand feet. So I had to use the camera judiciously lest I use up the battery completely. I put my camera and phone on charge after Bandhu dropped me at Hilley. Barsey is very small place in West Sikkim. From Okhrey to Hilley I had to reserve a car for Rs. 800 as there were no shared cabs available on this route. 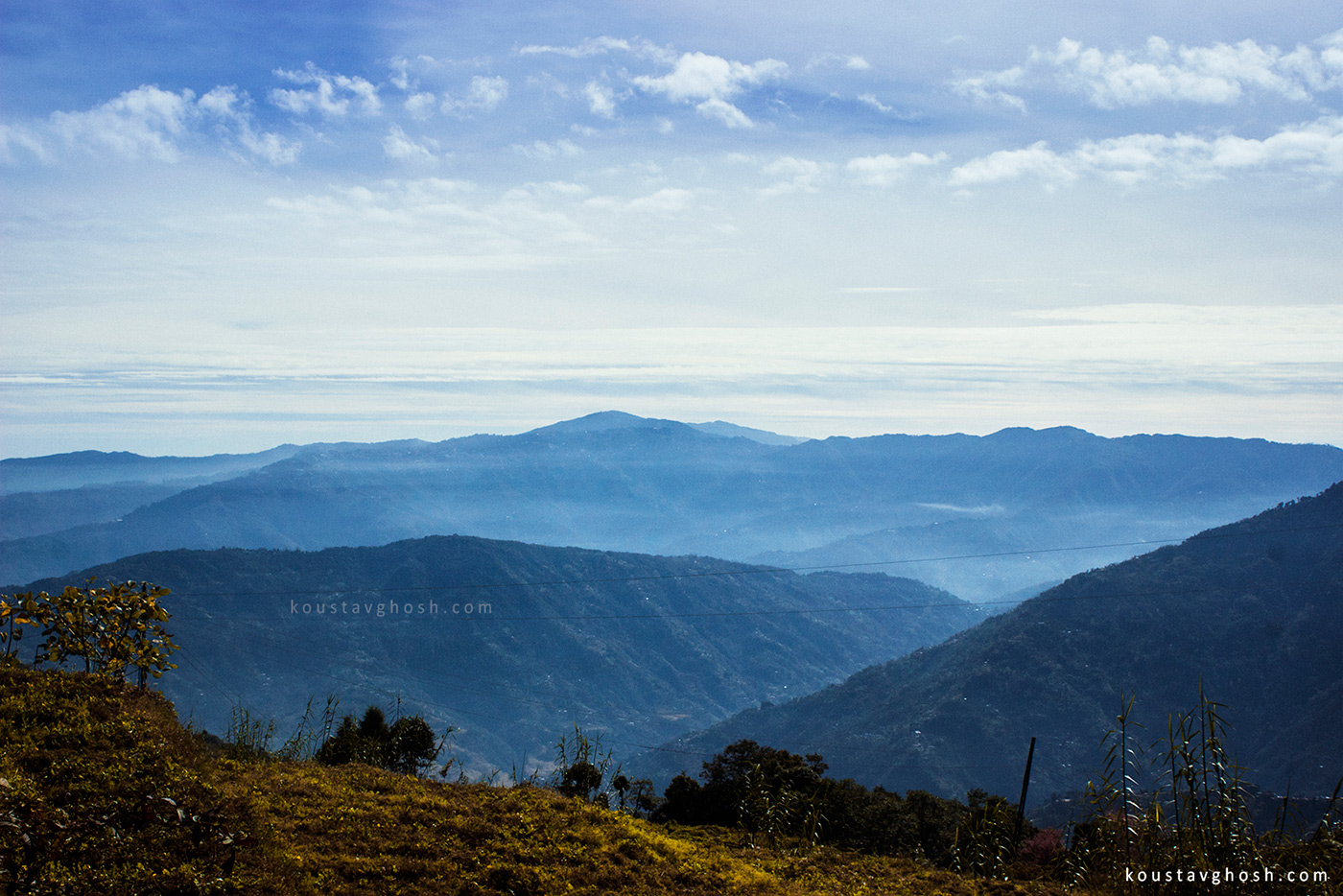 A photograph I took of the valley from Hilley

Hilley is a very small place at the top of a mountain. There are hardly five to six houses. Bandhu lives at Hilley with his family. He gave me a cup of tea and some biscuits when I visited his house. He was telling me how beautiful the valley looks in March and April when the Rhododendron flower blossoms all around. Bandhu asked if I need a guide for this trek. I didn’t want to take a guide as I wanted to go alone only. I packed up my camera and phone. They were fully charged by then. I went to the entrance of the Sanctuary where the Forest officer sits. One has to make a permit to enter the sanctuary. The entry fee as well as the fee for carrying a still camera were nominal. I paid seventy rupees for both the permits. The officer asked me the purpose of my visit. Since I didn’t take any guide along with me, he drew a map on a piece of paper for my convenience. It was a simple curvy trail to follow. I was also reminded not to take any path with a division to the left. I told myself, leave the left to follow the right. 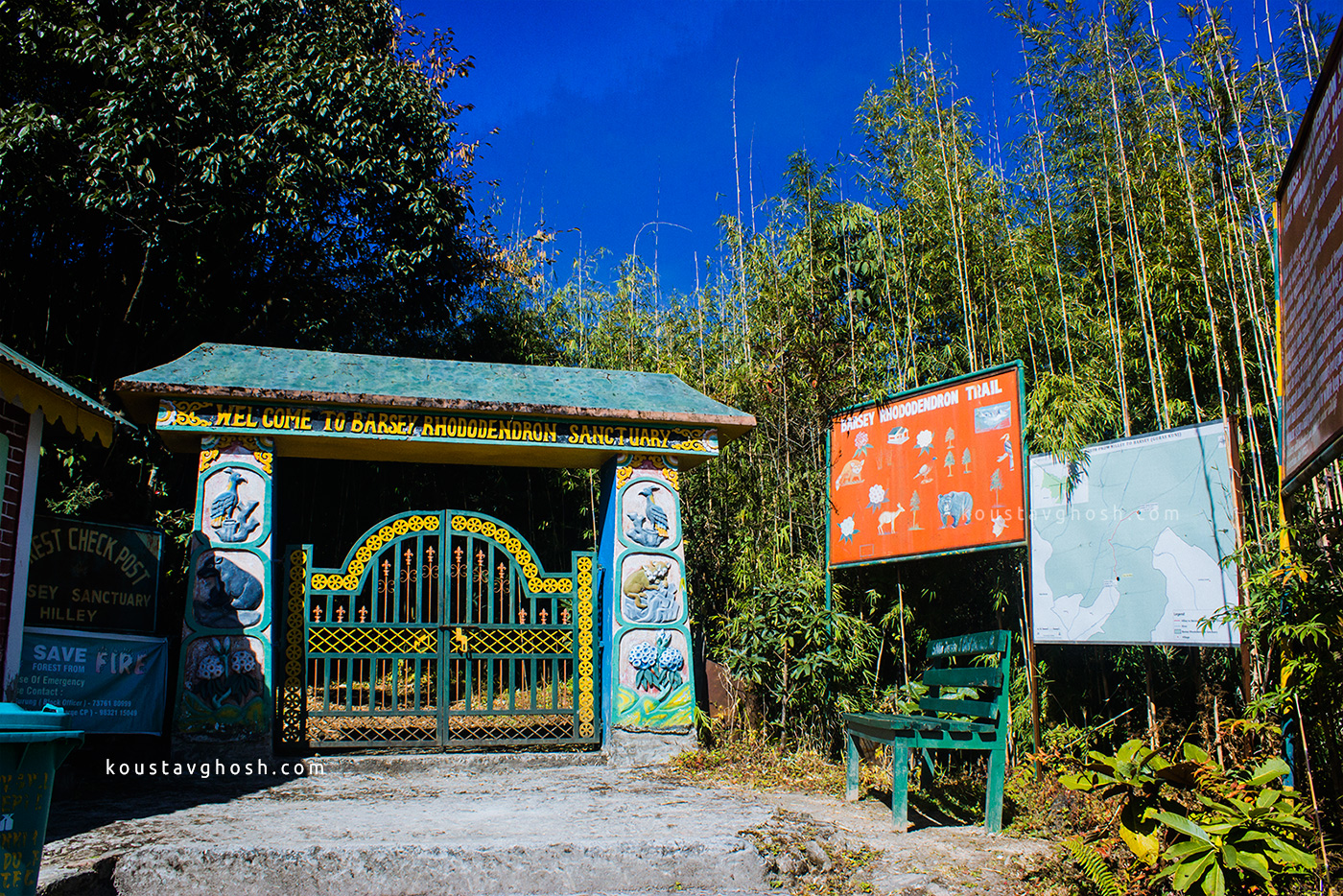 The entrance of the Rhododendron Sanctuary at Barsey

As I entered the sanctuary, I found myself surrounded with tall trees and dense forest. The trail was all yellow and orange filled with fallen dry leaves. The sunlight was coming through the thick woods and creating shadows all over the path. As I was stepping my foot, the dry leaves below my shoes were making a munching sound. I was carrying a bag pack, a bottle of water, a DSLR camera hanging from my neck, a tripod and also a mobile mounted in the gorillapod in my hand to capture a few shots during my trek. It was bit cold in the morning of November even though the sun was already up. I was feeling comfortable in a red sweatshirt hoodie and a beige coloured chinos. I made a big mistake by wearing a sneaker. At times the path was rough and I was afraid of ruining my shoe sole. 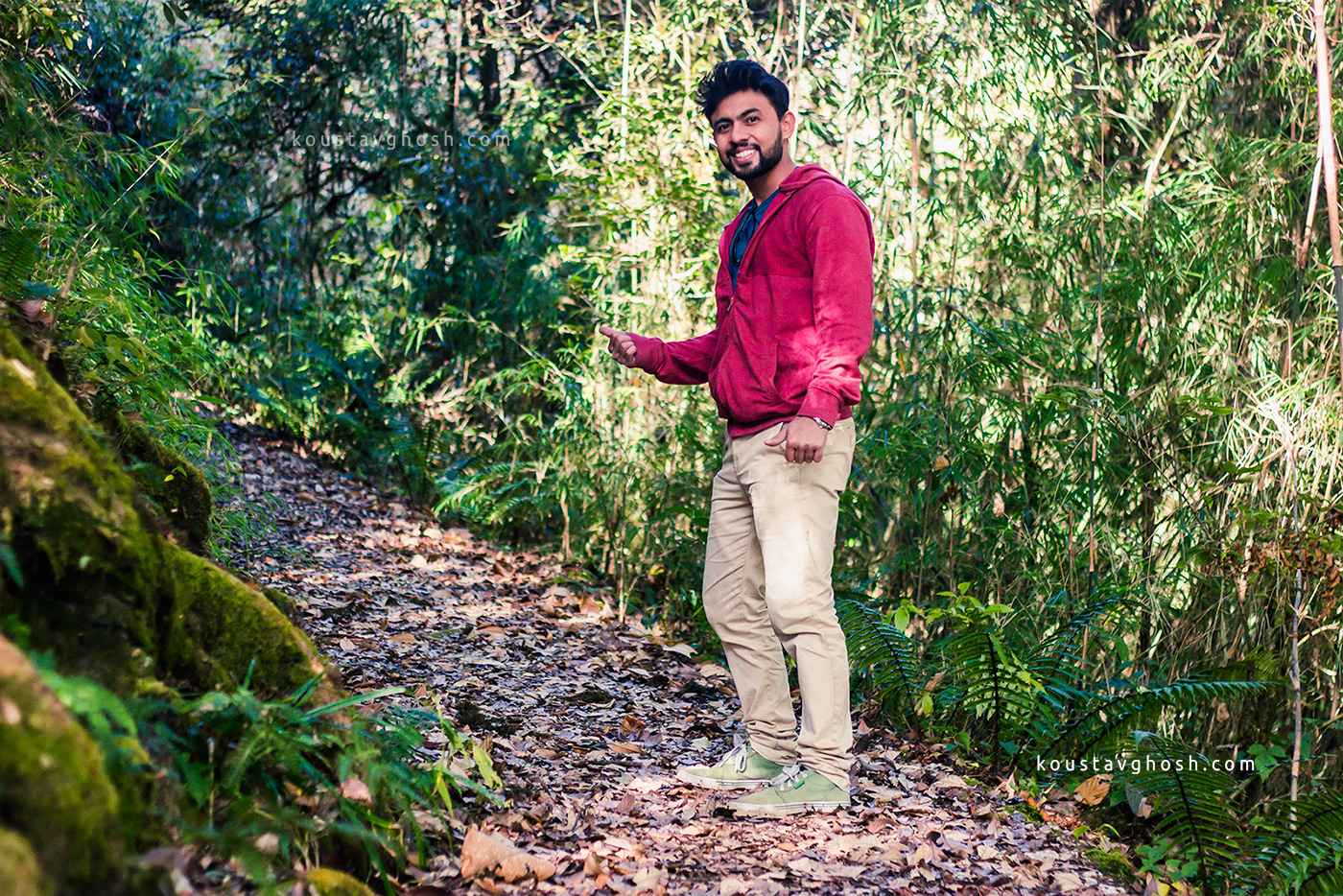 The trek is about four and a half kilometer stretched from Hilley (9,000 ft) to Barsey (10,000 ft). It was during the onset of winter. Leaves had already started to shed. The path was wide enough for walking. I was walking alone as I was the only tourist during my whole trip. I recorded few clips of my trek on my phone. After walking for around one hour I tried to locate myself using GPS on my phone, but it didn’t work. I was clueless about my trail so far. There was no way I could figure out how much of the trek I have covered. I was stopping to rest intermittently. The path was steep  winding and uphill. Due to high altitude, birds or animals were rarely seen. It was almost a silent journey. Occasionally the silence was broken by the sound of the stream flowing down from the top of the hill. Streams flowed across the road making it muddy and slippery. I stayed cautious while stepping on such areas. 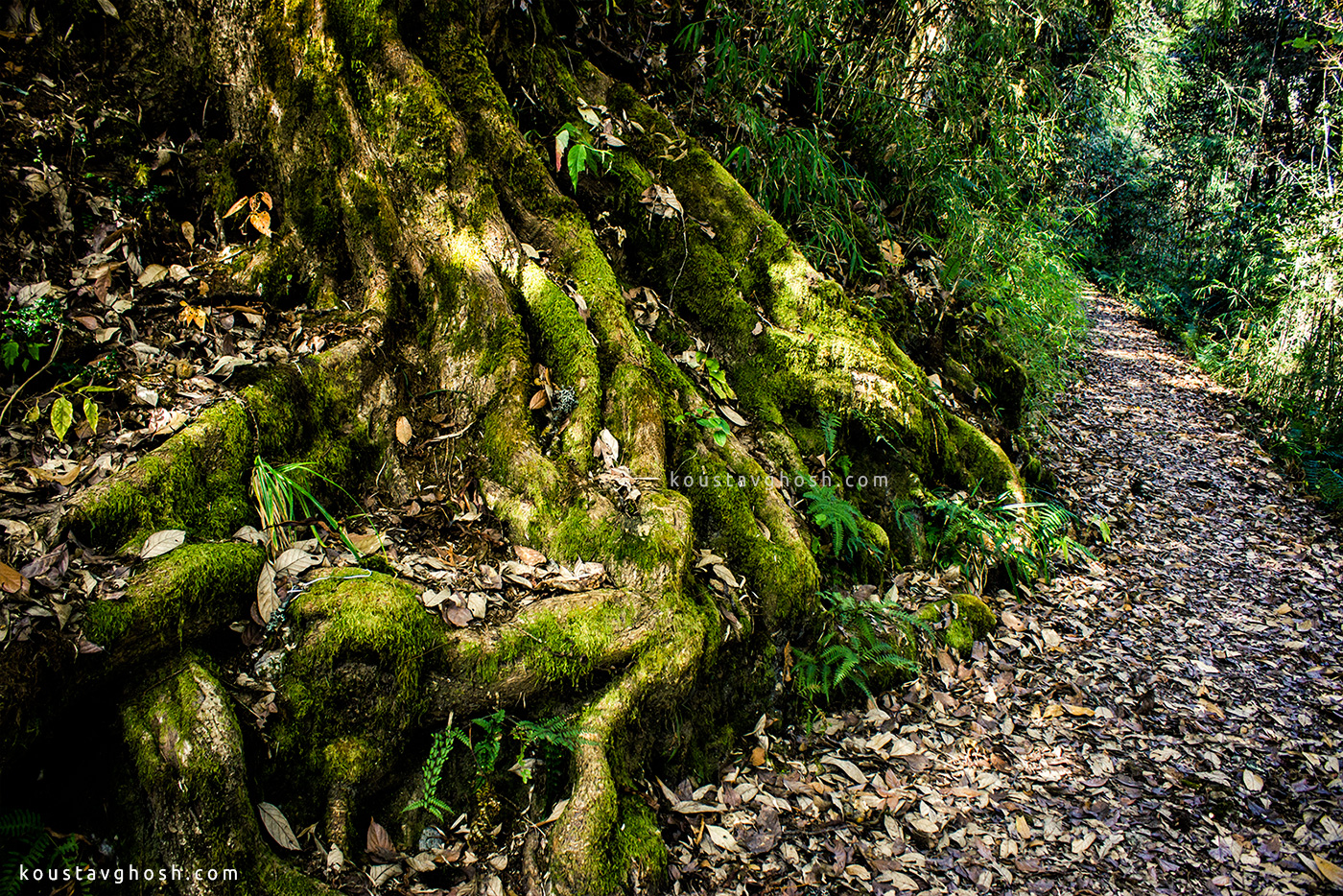 I found myself surrounded with tall trees and dense forest 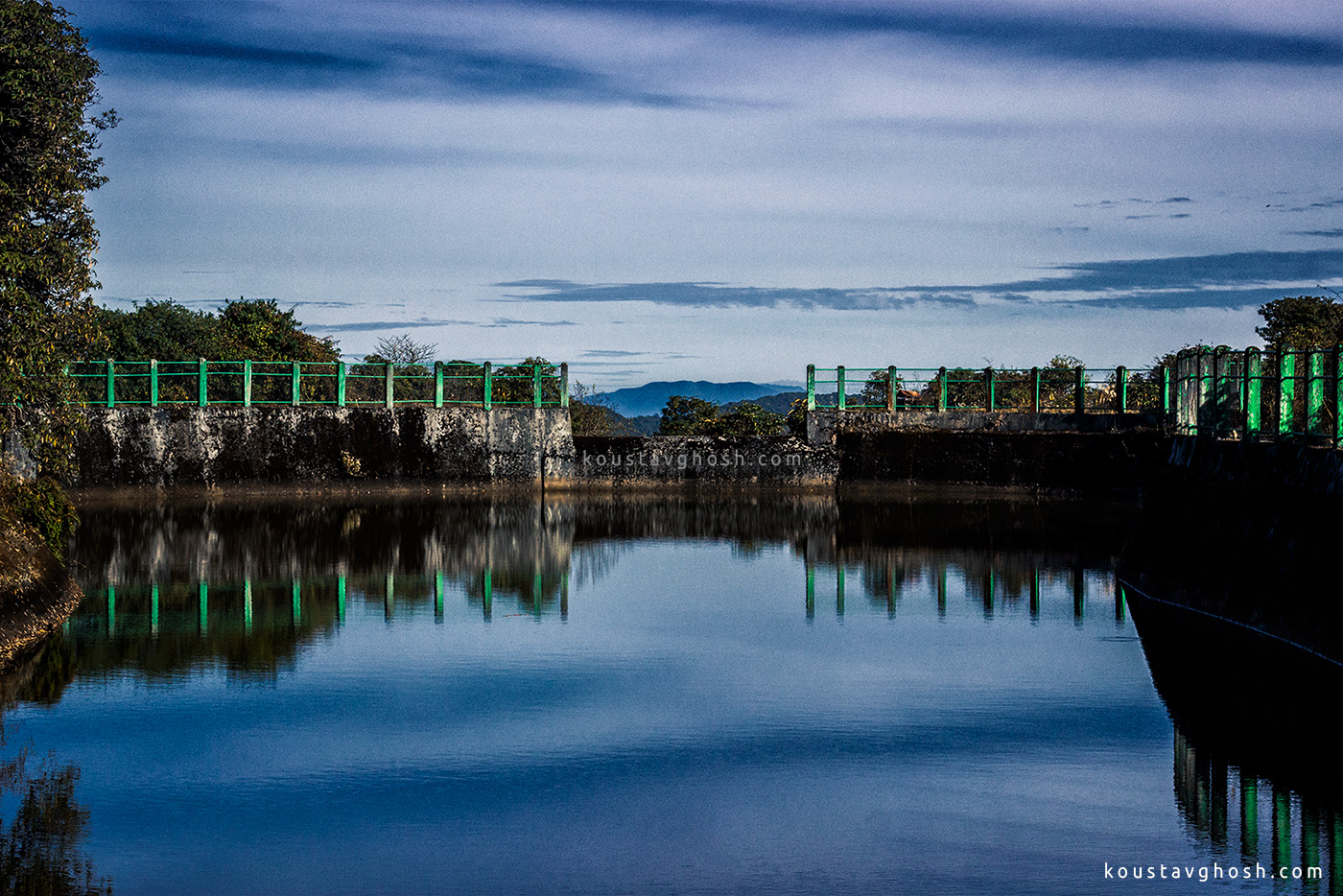 I began my trek around 12 PM. After walking around two and half hours I reached to a point where I found a sign board with a map. From the map I figured out that I had only half a kilometer left in my trek as I had covered 4.5 km already. According to the map, from that point if you trek 4.5 km uphill, you will reach to a point named “Guras Top”, a place from where “Sagarmata” aka Everest can be seen. I went towards my destination “Guras Kunj”. Rhododendron flower is referred to as ‘Guras’ by the locals here. Hence the naming convention of those places. The road to Guras Kunj was stony and rough making it very difficult for me to walk through it. My feet were hurting in the sneakers. There were various types of plants and trees beside the road. Suddenly I saw something and it made me stop and stare for minutes. I was stunned by the sheer beauty of it. I was standing in front of the third highest mountain in the world, the Kanchenjungha. It was such a magnificent view. The pure milk-white snow covered top in the backdrop of blue sky was looking stunningly beautiful and mesmerizing. From Barsey you can see the entire Kanchenjungha range along with Mt. Pandim and few more peaks. I was speechless for a long time. 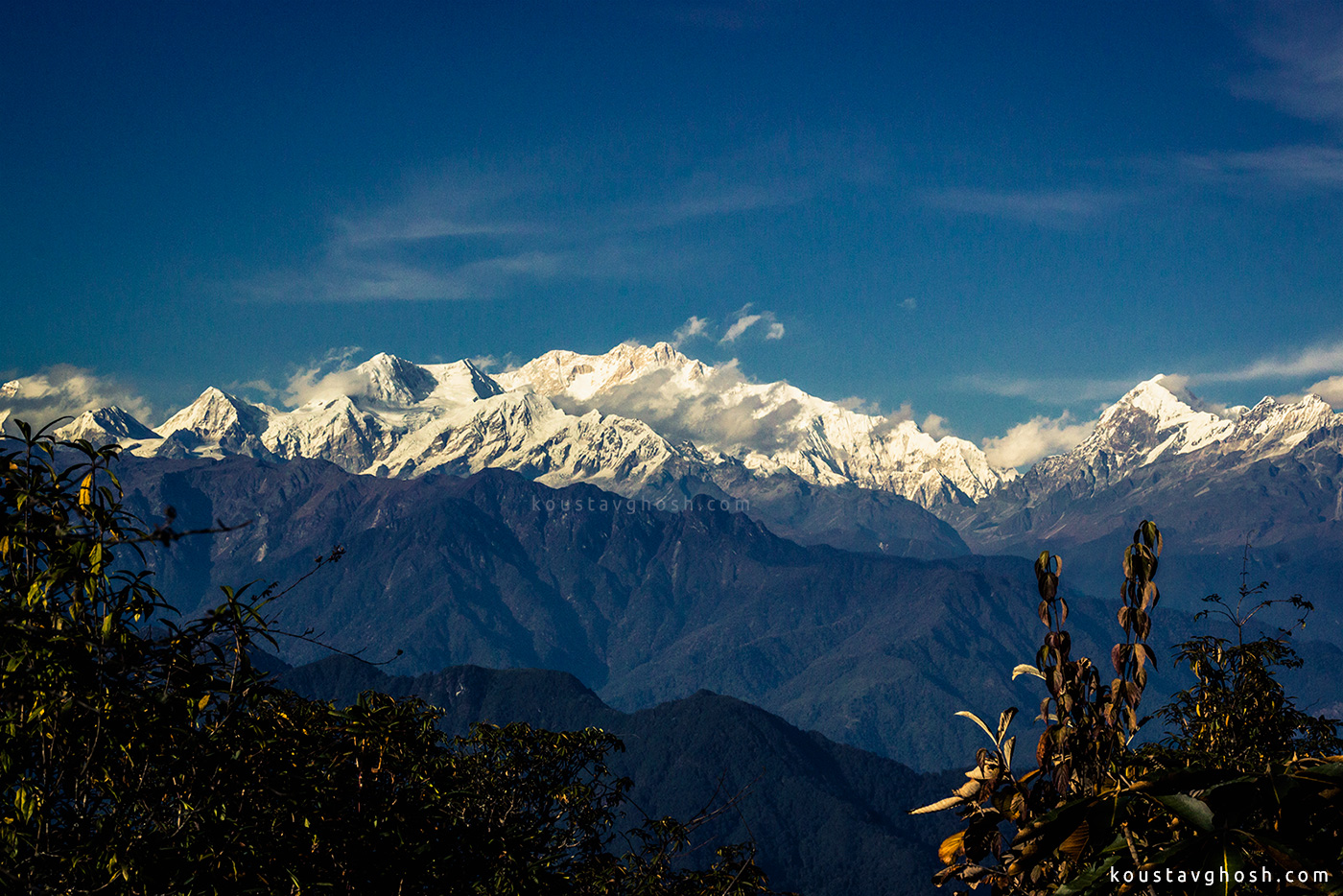 I was standing in front of the third highest mountain in the world, the Kanchenjungha

“Saab, idhar aaiye!!”. I observed a middle aged person waving at me. I understood that he must be the caretaker of the trekker hut where I was going to stay. I followed him to the trekker hut. It was early afternoon. I was feeling hungry. His name is Pusai Taju. He informed me that lunch will be ready in few minutes only. He made me some hot tea. I took the cup and went outside. After sometime I saw Pusai called me for lunch. I didn’t want to waste time and rushed into the hut.

I was still feeling like I was in a dream to see Kanchenjunga from such a close distance while enjoying the hot tea. I was feeling very happy about my trek, about my decision to go solo. It was such a serene moment to enjoy. There were only two people in Barsey. I was free from the hue and cry of the city, closer to nature. 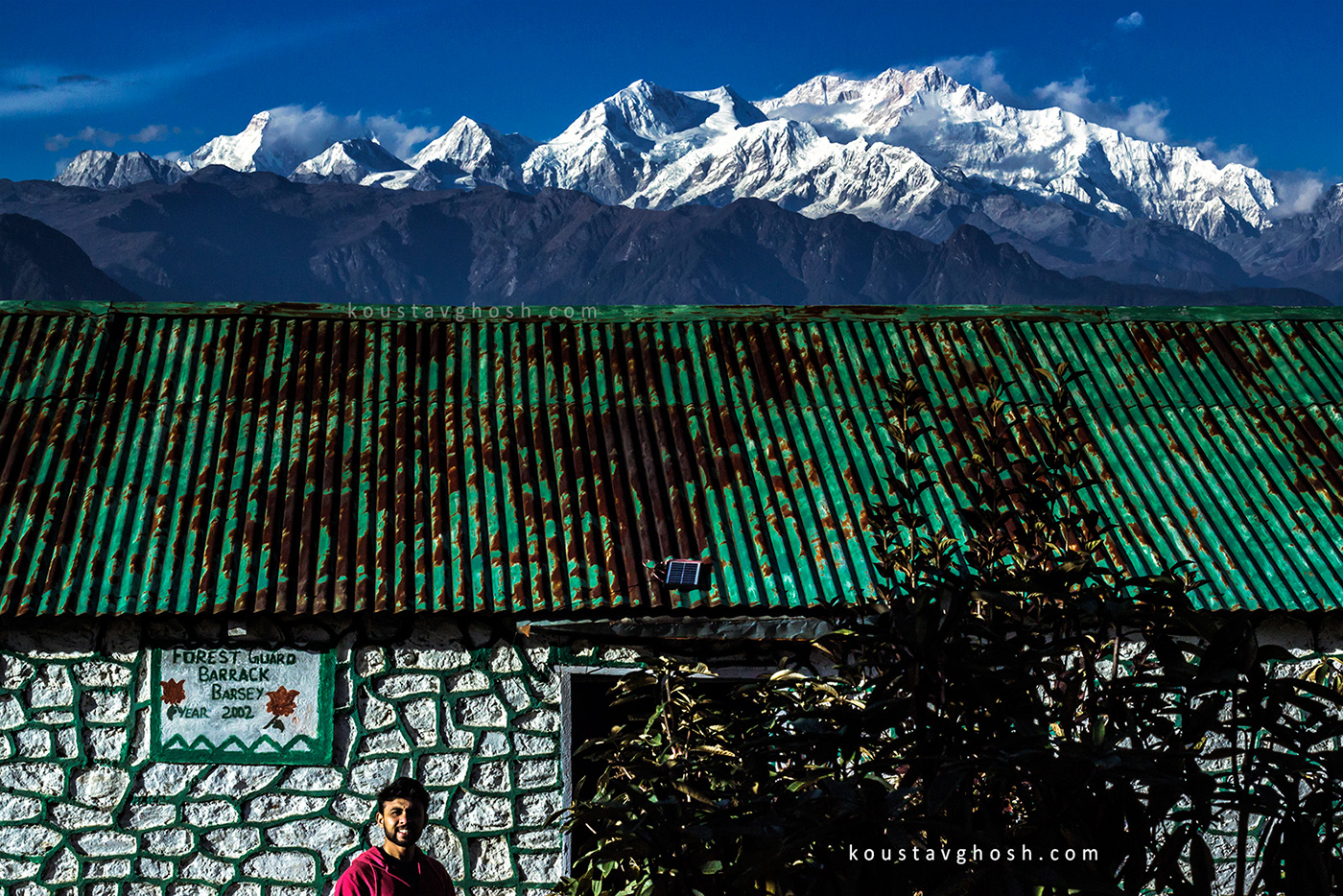 I was free from the hue and cry of the city, closer to nature

To be continued… (Barsey Burikhop Experience)

If you have missed my journey experience in Okhrey, here is the link – Into The Hills Of Okhrey