“Where can I get phone network here? Is there any such possibility?” I asked Pusai as he was busy working in the kitchen. He smiled and told me to try near the dry well behind the Forrest Barrack. I went close to the dry well and lifted my phone with a hope to get network connectivity. But there was no signal. Eventually I prepared myself for spending the next two days without phone network. After finishing my lunch I came outside. The warmth from the sunlight was a saviour in the otherwise chilly afternoon. At Barsey, there are two places for accommodation. One is Guras Kunj which is a bit luxury as compared to the Forrest Barrack where I stayed. Though ‘luxury’ would be a bit of exaggeration. Forrest barrack is overseen by Pusai. He lives with his family at Buriakhop. He came 6 km uphill from his home to take care of me. 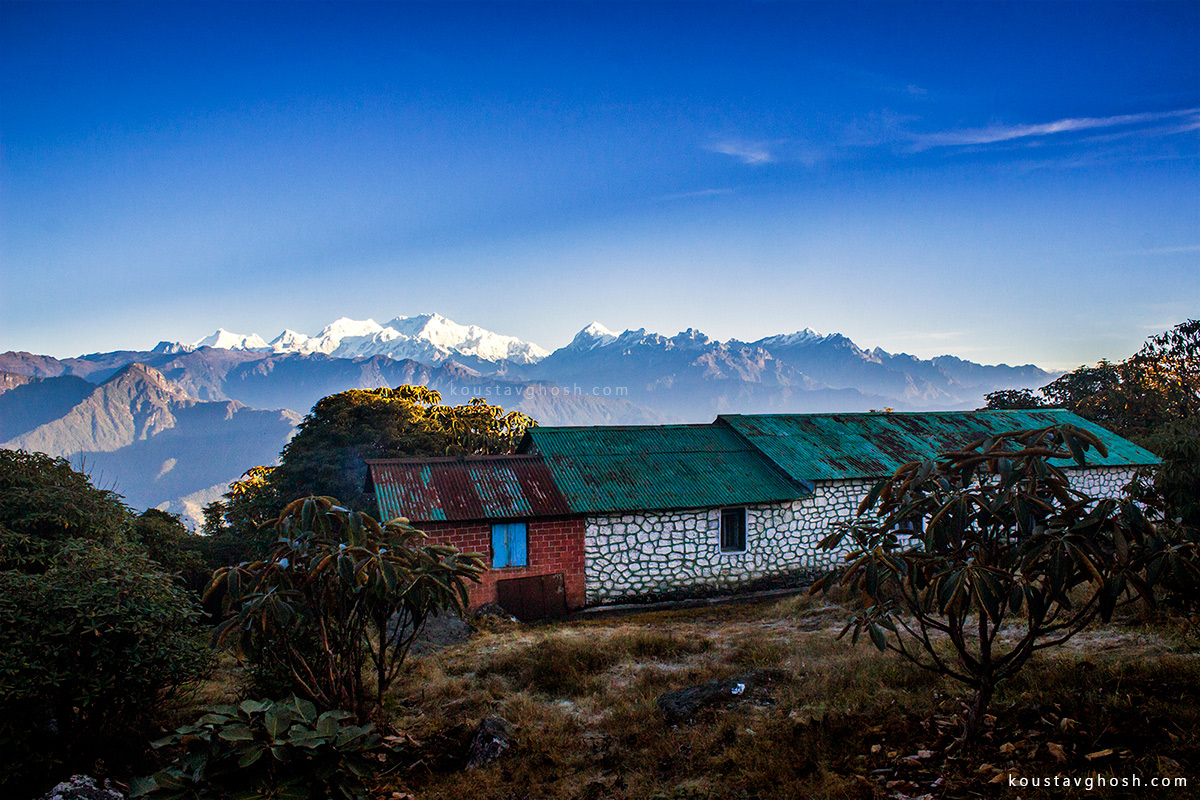 It was a sunny day. The weather was pleasant with blue sky and some white clouds. The Kanchenjunga range seemed to be at a hand’s throw. The snow white peaks were reflecting the sunrays. Since Pusai was busy in the kitchen, I came outside to take a stroll. There was a stony path leading to the jungle. The path was decorated with unknown flowers and shrubs on both the sides. I took a diversion from the path and walked towards the Guras Kunj. It was closed. In a cold winter afternoon, the place would give out the vibe of a haunted place. It could be an ideal location for the film makers to shoot. I took some photographs of Guras Kunj. Dusk was slowly setting in. As the sun light was losing its warmth I was feeling a bit cold. I wanted to take my own photograph, some self portraits. I mounted the camera on the tripod and set it on self-timer mode. After few attempts I was able to capture a satisfactory self portrait in front of Kanchenjunga. 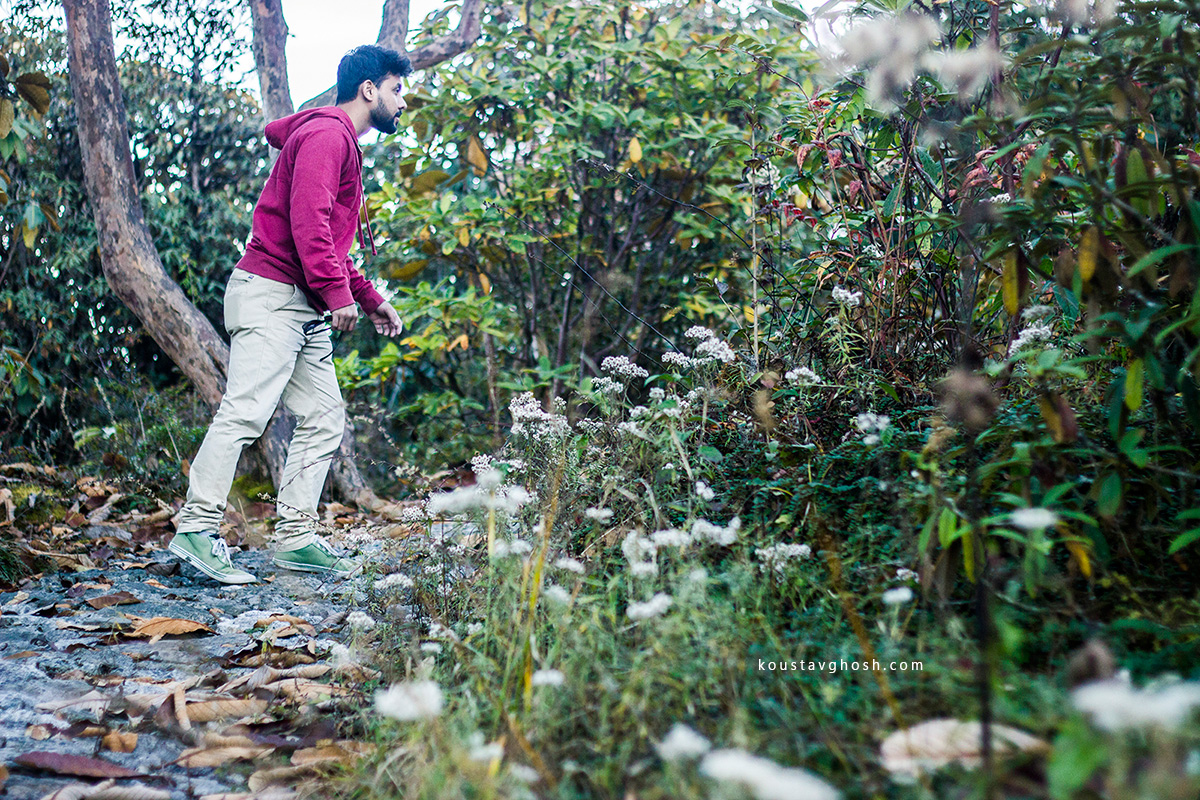 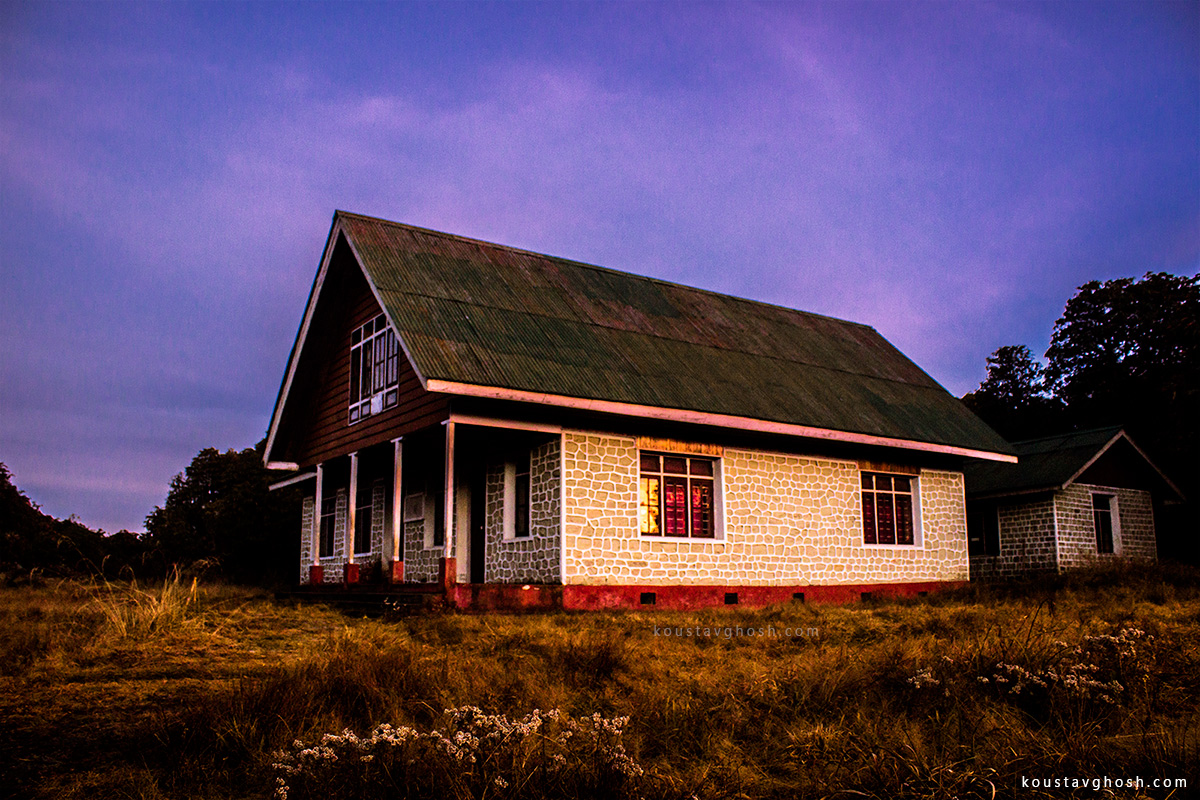 The whole sky turned into orange and then red as the sun set. The temperature dropped quickly. I decided to go inside my room. I was shivering a little in the cold. I put on my thick jacket instead of the sweat shirt and felt warm. Pusai already made some tea for me. I was amazed by his kind hospitality, time and time again. The hot tea was a bliss in that cold evening. He asked me not to go outside in the evening as some wild animals usually roamed around the place. So it was safe to stay inside since I was alone. Judging the temperature outside, I decided to stay inside only. There were four beds in my room with enough quilts and blankets. I took one blanket and a quilt and then slipped inside it. As there was no electricity at Barsey, Pusai brought two solar powered lamps from his home. He set one lamp in my room for my convenience. With full charge it generally lasts for four to five hours. I took out a story book I brought along to spend the long nights in the mountains. I started reading it. I was lost in the book “Old man and the sea” by Earnest Hemingway only to be alerted by Pusai’s call for dinner. He had prepared roti and chicken for me. I was hungry and made no delay to finish my dinner. As the night grew, the temperature dropped further down to almost zero degree. It was a tiring day and soon I fell asleep. 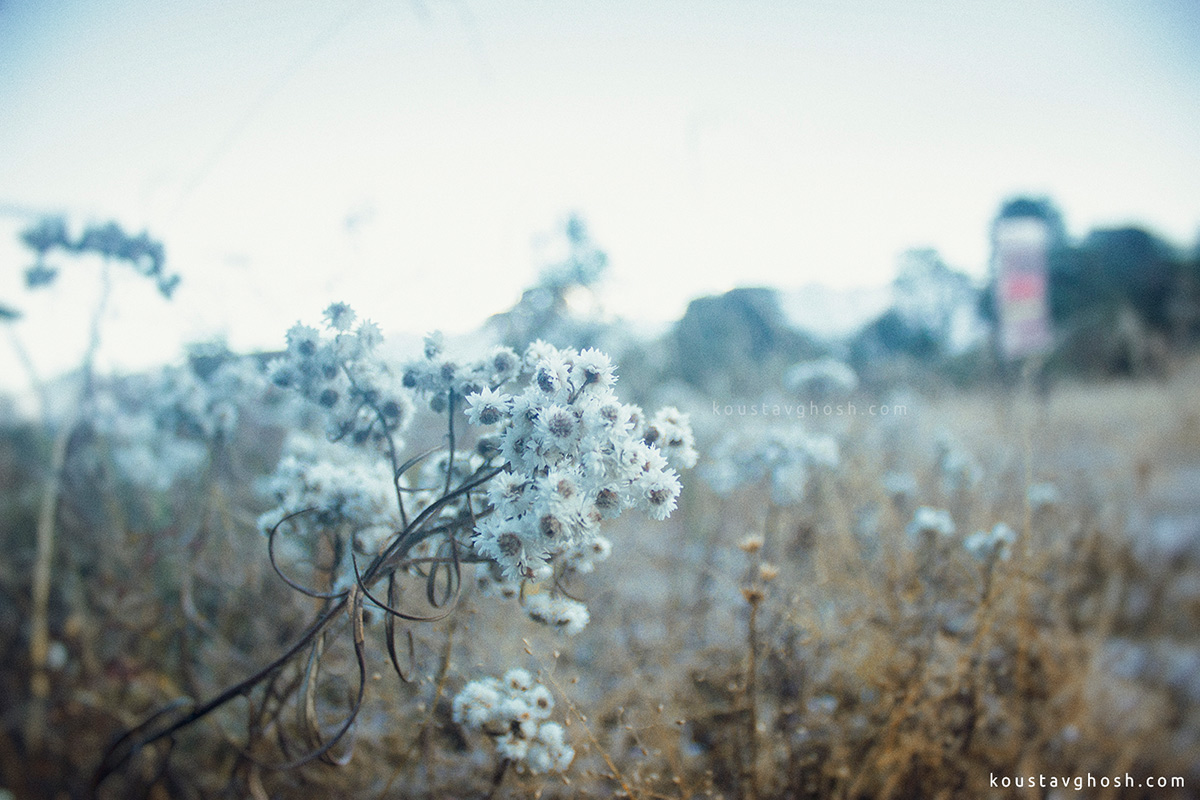 The ground was covered with fine white frozen sleet

Next morning I woke up at 5 AM. I did not want to miss the sunrise. I got ready and went out with my camera and tripod. It was chilling cold outside and the sun was yet to rise. The ground was covered with fine white frozen sleet. I could feel the cold in my feet through my sneakers. As soon as I removed my gloves to take few photos, my hands got almost numb. The Kanchenjunga peaks were still seen white with snow covered all over. The eastern sky was covered with clouds and it was difficult to see the sun. Finally the sun peeped through the clouds and the first light fell on the peak of Kanchenjunga. It was a stunning moment to see the sunlight over the Kanchenjunga. The grandeur of Kanchenjunga became even greater at this moment. You would want to freeze this moment for lifetime and to live in this moment forever. 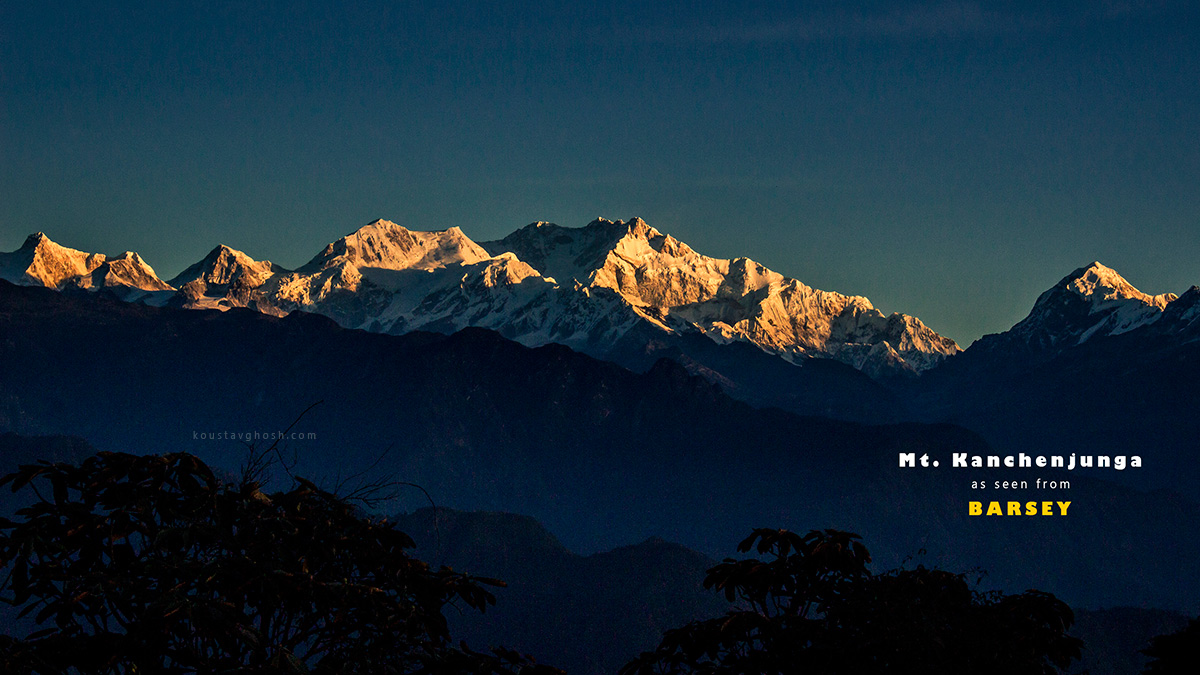 The grandeur of Kanchenjunga became even greater at this moment

Pusai Taju had woken up by then and already made some tea for me. I took small sips from the cup of hot tea while enjoying the beauty of Kanchenjunga. It was one of the best moments from the trip. I would love to come back to this place over and over again. The call by the mountains is unreal and you cannot escape yourself from it. I decided to trek downhill to Buriakhop and to stay the night over there. After having my breakfast, Pusai and I started our journey. It was a 6 km downhill trek from Barsey to Buriakhop where you will descend almost two thousand feet. 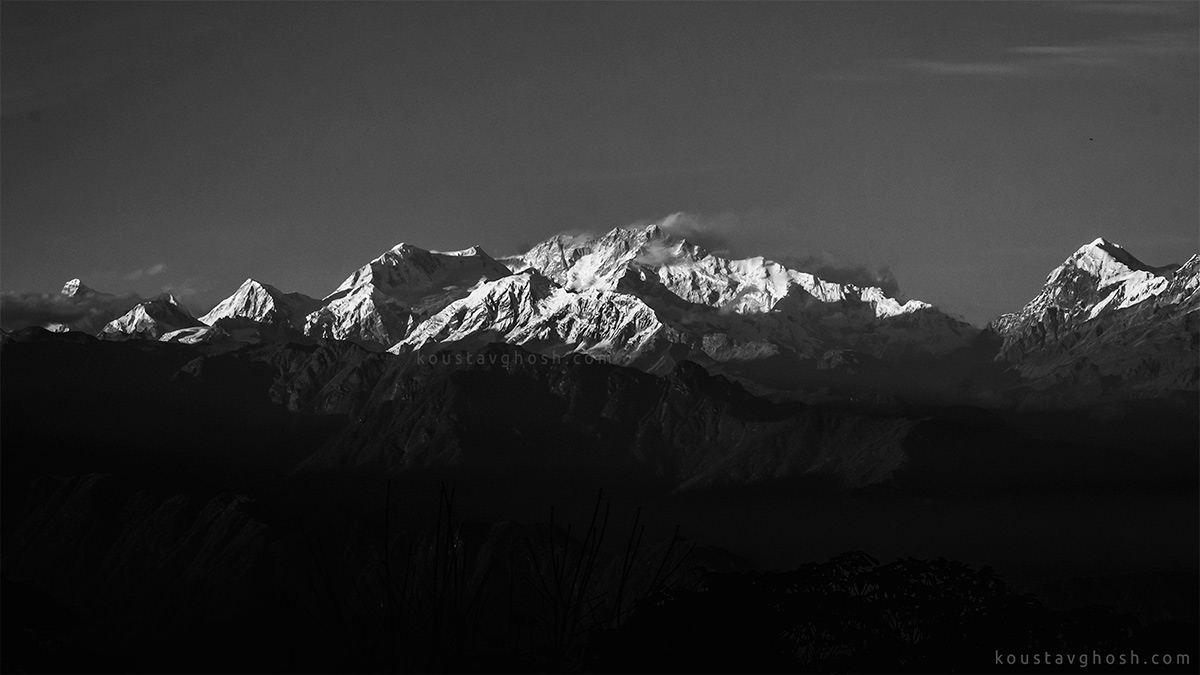 To be continued… (Burikhop and Milky Way Experience)

If you have missed my trekking experience to Barsey, here is the link – From Barsey With Love